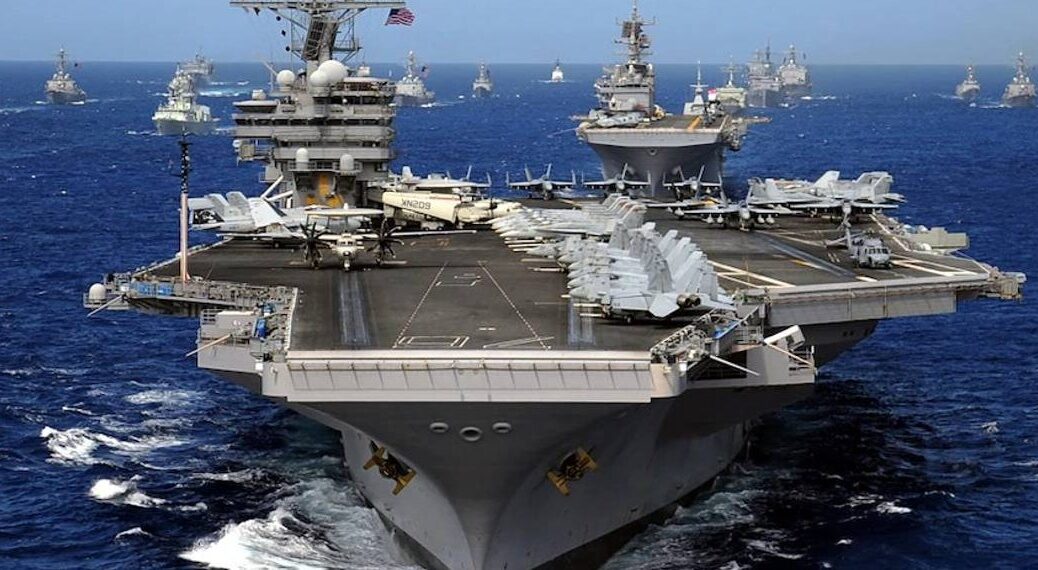 The Taiwan military began yesterday a five-day live fire military exercise that simulates a land invasion of the island by the Chinese People’s Liberation Army. The military drill comes at the same time China said it is getting seriously prepared for House Speaker Nancy Pelosi’s anticipated visit to Taiwan in August.

House Speaker Nancy Pelosi has invited Texas Republican Michael McCaul and several other influential members of the House to travel with her to Taiwan later this month, according to NBC News. Congressman McCaul declined the invitation because of a conflict with his personal schedule. However, he encouraged other House members to go with Speaker Pelosi to Taiwan in a show of force against China. Meanwhile, the Ukrainian army used American missiles to blow up an important bridge vital to the Russian military.

Green light for the Chinese Army to intervene – The US sends the USS Ronald Reagan to Taiwan – YP.AM. China: “Pelosi will not land…” 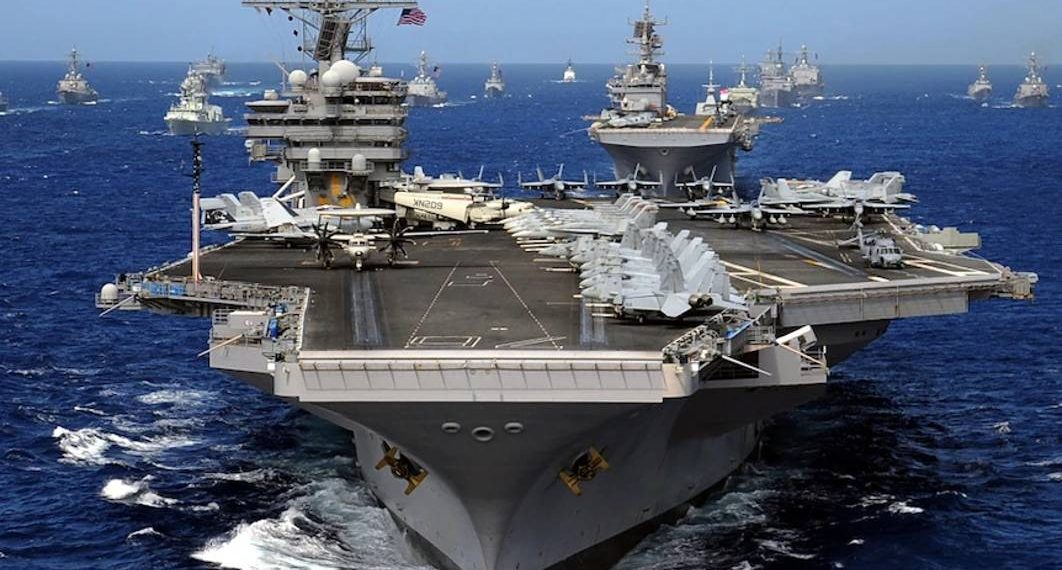 The US and China are on a tightrope as the Pentagon ordered the USS Ronald Reagan aircraft carrier and its Battle Group to head to the Taiwan Strait in preparation for Nancy Pelosi’s visit.

The Chinese Ministry of Foreign Affairs issued two announcements and one the Ministry of Defense of the country emphasizing that the “Army will face the American challenge”!

At the same time, the information about the readiness of China’s fighter squadrons is fully confirmed.

The situation is critical as neither country seems to be backing down.

Read here what has gone before

The aircraft carrier USS Ronald Reagan is in a hurry

The US aircraft carrier USS Ronald Reagan and its strike group, including a destroyer and a cruiser, departed Singapore heading northeast towards the South China Sea.

China and the United States are beefing up their military presence around the Taiwan Strait as tensions rise over a possible visit by US House Speaker Nancy Pelosi to the island.

The US military has not disclosed its final destination, but the route will bring the aircraft carrier through the Taiwan Strait if it continues in the same direction.

US officials told The Associated Press that if her visit takes place, the military will increase the movement of forces and assets in the Indo-Pacific region.

They also said fighter jets, ships, surveillance vehicles and other aircraft are likely to be used to provide overlapping rings of protection for Pelosi’s flight and arrival in Taiwan.

Recent satellite images have shown how the PLA is also building up its forces in the region, including expanding an air base in Fujian, which is across the Taiwan Strait.

The images show that Longtian Air Base, from which fighter jets can reach Taipei in seven minutes, is packed with Flanker-series fighters – either Russian-made Su-27s or Chinese variants of the J-11 or J- 16 series – and special drones made from old J-6 aircraft.

In the event of a conflict with Taiwan, hundreds of unmanned J-6s could be used as decoys to knock out the air defense system, launch electronic warfare or act as specially modified missiles.

“China has recently made clear its stance on the US, its determination and strong opposition to any visit by Pelosi to Taiwan.

We are ready to meet the American challenge!

Suppose the US side stubbornly clings to its misconduct, China is bound to take decisive and powerful measures to safeguard its national sovereignty and territorial integrity.

For all the consequences that will be caused by this, the responsibility will belong exclusively to the USA”.

Reporter’s Question: A US official said that if Pelosi goes to Taiwan, the Army will increase its forces in the Asia-Pacific region, including fighters.

Chinese Foreign Ministry Spokesperson’s Response: You may have missed our updates in the past few days. We have repeatedly made clear our firm opposition to any visit by the Speaker of the US House of Representatives, N. Pelosi, to Taiwan.

If the American side persists and challenges China’s red line, it will be faced with decisive countermeasures.

The US will bear full responsibility for any serious consequences that arise.

China’s Ministry of Defense: We are fully prepared – We will not stand idly by

After the Chinese Foreign Ministry stressed that China issued stern warnings to US officials, the country’s Defense Ministry took over.

“The PLA will not stand idly by if Pelosi visits the island of Taiwan,” warns the Chinese Ministry of Defense, stressing that the country’s Army is “fully prepared” for all scenarios.

The announcement states that:

“China is fully prepared for any eventuality regarding US House Speaker Nancy Pelosi’s planned trip to Taiwan. If the US insists, the military will not stand idly by and strong measures will be taken to prevent any outside interference and separatist attempts at ‘Taiwan independence’.”

Information from China indicates that the missile force has been ordered to proceed with readiness exercises with new missiles that will target any US aircraft carrier and other large warships that may participate in Pelosi’s visit.

Tan Kefei, a spokesman for China’s Ministry of National Defense, said that if Pelosi, as the No. 3 US politician, visits Taiwan, it will be a serious violation of the one-China principle and the three China-US joint communiques. , and will seriously damage China’s sovereignty and territorial integrity, as well as the political basis of China-US relations .

It would certainly cause serious damage to bilateral military relations and lead to an escalation of tensions in the Taiwan Strait.

China demands that the US fulfill its commitment not to support Taiwan’s secession and that Pelosi not visit Taiwan, Tan said, noting that if the US insists, the Chinese military will not stand idly by and take strong measures to prevent any external interference and secessionist attempts of “Taiwan independence”. The Chinese Army is determined to safeguard national sovereignty and territorial integrity.

Tan’s remarks show that the PLA is fully prepared for all responses if Pelosi visits the island,” said Song Zhongping, a Chinese military expert.

The reports describe a scenario where China could send aircraft to “escort” Pelosi’s plane and prevent it from landing in Taiwan, coming into conflict with a US military aircraft, a US official said, stressing the concern.

Hu Xijin, a commentator for the Global Times, said he expects to see PLA aircraft flying alongside Pelosi’s plane in the airspace of Taiwan Island. This would set a big precedent for the PLA to patrol over the island, which would be far more important than Pelosi’s visit.

Sooner or later, PLA aircraft will enter the airspace over Taiwan in a legal and just move to assert China’s sovereignty over the island. To do this, we need an opportunity that could push the international community to better understand that the movement of the mainland is natural and not a challenge. Pelosi’s possible visit to the island will lead to significant changes in the situation in the Taiwan Strait, and the strong reaction of the PLA is in line with the expectations of the international community. The visit will give the PLA a good reason to send aircraft over the island, Hu said.

We have to make full preparations this time for a showdown with them. If they dare to take a small step, we will take a big step to crack down hard on the arrogance and provocation of the US and the Democratic Party , Hu said.

Xin Qiang, deputy director of the Center for American Studies at Fudan University, told the Global Times that the US executive branch is very worried that this possible visit will cause a conflict between China and the US or even trigger a crisis.

“Pelosi doesn’t care that it might cause chaos in US-China relations, because the executive branch and the military will be forced to take the consequences and deal with the consequences,” he said.

Lü Xiang, a researcher at the Chinese Academy of Social Sciences, told the Global Times that he believes Pelosi has clearly seen that those who instigated her to go to Taiwan are mostly Republicans who only want to create more chaos in the US so they can make more profits. in the midterm elections.

Song, for his part, believes the Chinese military should declare the entire island of Taiwan a PLA exercise zone, intercepting all unauthorized planes flying in the zone if Pelosi visits the island.

2 thoughts on “Will China shoot down Nancy Pelosi’s plane?”