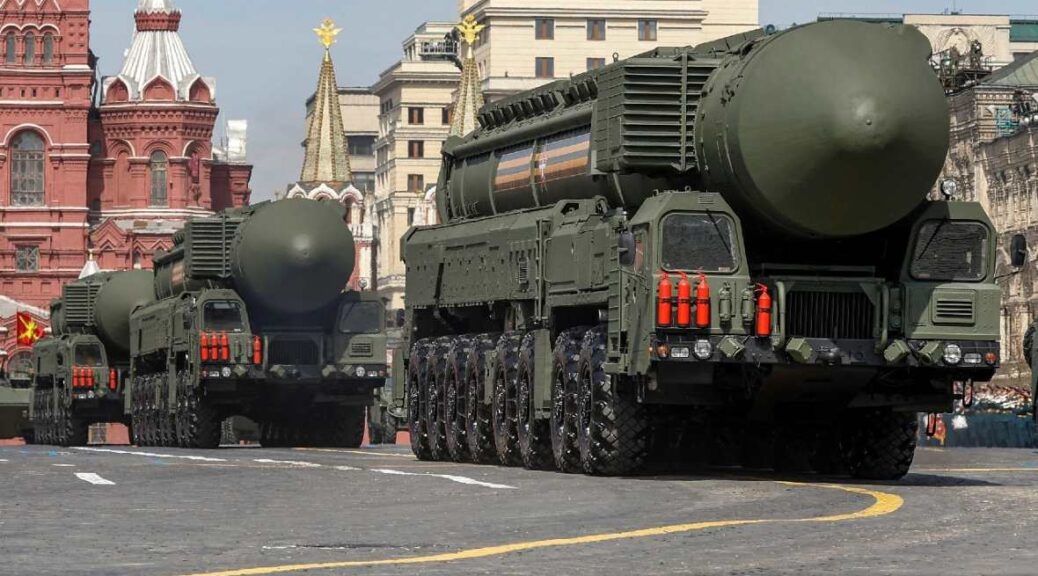 In short, I have no idea.

The West in its propaganda is assuming that Russia will use tactical nuclear warheads in response to being caught in a corner.

Following the announcement of partial mobilisation in Russia on 21 September, Russian President Vladimir Putin has once again threatened Western countries with nuclear weapons. “If the territorial integrity of our country is threatened, we will certainly use all means at our disposal to protect Russia and our people. This is not a bluff,” he said.

The general idea is that Russia is carrying out referenda in the Donbas as well as the Zaporozhzhia and Kherson regions so that they can be declared part of the Russian Federation and any attack on them (inevitable) will be regarded as an attack on Russia and see a nuclear response.

The Duran and other commentaries generally avoid the N-word and in today’s broadcast Alex Christoforou reflected that the hullabaloo in the West is just that or it is an example of the endless projection we have come to see from that quarter.

He has asked people to comment so I will try my best to bring together elements that are not just speculation or projection that might help us to clarify our thoughts.

I can tell you in advance that I think it is all up in the air.

Read the following from Vladimir Putin’s speech and tell me if you think this is a specific threat to use nuclear weapons, tactical or otherwise.

Washington, London and Brussels are openly encouraging Kiev to move the hostilities to our territory. They openly say that Russia must be defeated on the battlefield by any means, and subsequently deprived of political, economic, cultural and any other sovereignty and ransacked.

They have even resorted to the nuclear blackmail. I am referring not only to the Western-encouraged shelling of the Zaporozhye Nuclear Power Plant, which poses a threat of a nuclear disaster, but also to the statements made by some high-ranking representatives of the leading NATO countries on the possibility and admissibility of using weapons of mass destruction – nuclear weapons – against Russia.

I would like to remind those who make such statements regarding Russia that our country has different types of weapons as well, and some of them are more modern than the weapons NATO countries have. In the event of a threat to the territorial integrity of our country and to defend Russia and our people, we will certainly make use of all weapon systems available to us.

This is not a bluff.

He does not seem to me to explicitly mention nuclear weapons.

Russia, until now, has not to my knowledge used anything like its full arsenal of conventional weapons and if what I have been reading, such weapons are 30 years ahead of those of the West.

And as to nuclear blackmail there is more than sufficient evidence of this as can be seen from the following two items:

France’s foreign minister said that Russian President Vladimir Putin, when making threats about using nuclear weapons, needs to understand that NATO, too, is a nuclear alliance, but he ruled out NATO-led military intervention to defend Ukraine.

Asked whether Putin’s threat of “such consequences that you have never encountered in your history” was tantamount to threatening Russian use nuclear weapons in the Ukraine conflict, Foreign Minister Jean-Yves Le Drian said it was indeed understood as such.

Tory leadership frontrunner Liz Truss said she would be willing to unleash nuclear war if she becomes Prime Minister.

The Foreign Secretary – who looks increasingly likely to succeed Boris Johnson in the top office – tonight said she was “ready” to hit the nuclear button if needed – even though it would mean “global annihilation”….

“I think it’s an important duty of the Prime Minister and I’m ready to do that.”

She then reiterated: “I’m ready to do that.”

That seems a lot more unambiguous than Putin’s “nuclear blackmail”.

Alex Christoforou in his discussion cites only the above speech by Putin but there have been statements by other politicians that seem to reference the possibility of nuclear war.

Our sworn friends – Western bosses of various calibres, to whom this hysterical appeal is addressed – must finally understand one simple thing. It directly concerns the hybrid war between NATO and Russia. If these idiots continue the unrestrained pumping of the Kiev regime with the most dangerous types of weapons, then sooner or later the military campaign will move to another level. Visible borders and potential predictability of the actions of the parties to the conflict will disappear from it. It will follow its own military scenario, involving new participants in it. It has always been so.

And then Western countries will not be able to sit in their clean houses and apartments, laughing at how they are carefully weakening Russia with someone else’s hands. Everything will catch fire around them. Their people will grab grief in full. They will literally have the earth burning and concrete melting. We’ll get a lot of it, too. It will be very, very bad for everyone. After all, it is said: “From these three plagues, from fire, smoke and brimstone coming out of their mouths, a third part of the people died” (Rev 9:18).

But while the narrow-minded politicians and their dim-witted think tanks, thoughtfully twirling a glass of wine in their hands, talk about how they can deal with us without entering into a direct war. Dull idiots with a classical education.

Is that a threat?

I suppose it is in the eyes of the beholder.

Even more ignored (but not by the West), are the statements of various people close to the centres of power on state-run Russian television.

This is available but for some strange reason is age-restricted.

And then there is this.

This seems to me to be a bit more ambiguous than Alex would lead us to believe.

Why does he and Alexander Mercouris not discuss the above?

Having watched all this and having watched Russia I KNOW that there is a far more developed understanding of what war of this sort means and in particular what nuclear war (and the nuclear winter).

They have always wanted to sit secure in their own country and do business with the world but the West has not allowed them to do that.

I cannot say they have not waged aggressive wars but generally, they have been subject to invasion every 100 years or so.

It is obvious to anyone looking objectively they are, as the Russian leadership says, out to destroy Russia as a sovereign state and perhaps as a state, as well.

That is Russia’s history.

I would counsel ignoring the commentaries in western media and go straight to the source, Putin’s decree of 02/06/2020.

Об Основах государственной политики Российской Федерации в области ядерного сдерживания
18. The Russian Federation reserves the right to use nuclear weapons in response to the use of nuclear weapons and other types of weapons of mass destruction against it and (or) its allies, as well as in the event of aggression against the Russian Federation using conventional weapons, when the very the existence of the state.

19. The conditions determining the possibility of the use of nuclear weapons by the Russian Federation are:

a) receipt of reliable information about the launch of ballistic missiles attacking the territory of the Russian Federation and (or) its allies;

b) the use by the adversary of nuclear weapons or other types of weapons of mass destruction in the territories of the Russian Federation and (or) its allies;

c) the impact of the enemy on critical state or military facilities of the Russian Federation, the failure of which will lead to the disruption of the response of nuclear forces;

d) aggression against the Russian Federation with the use of conventional weapons, when the very existence of the state is threatened.

I would argue that it is by no means clear if the inclusion of the Donbass, Zaporozhzhye and Kherson would come under “aggression against the Russian Federation with the use of conventional weapons, when the very existence of the state is threatened.”

Time will tell and by what I am hearing we will not have to wait long,

One thought on “Will Russia use tactical nukes in Ukraine?”