By Arthur Evans and Drago Bosnic – Unconfirmed reports of ballistic missiles hitting the largest US military base Ain Al-Assad in Iraq have since been denied, yet such a scenario is far from impossible given the fact that the most recent US actions in Iraq have caused the tensions to erupt beyond clearly predictable outcomes.

At the moment, the heated situation in the Middle East has almost reached the 1963 Cuban Missile Crisis levels. Although the then events were a potential conflict between two nuclear superpowers, this most recent escalation by the US is no less “nuclear”. The assassination of General Qasem Soleimani and Abu Mahdi Muhandiz came like thunder out of a blue sky.

The developments in Syria and Iraq have indicated that the conflict was entering its final stages and that the situation was stabilizing. Regardless of the protests in Iraq, actions of the Islamic State sleeper cells and the final stages of operations in the Idlib province carried out by the Syrian army, the region is once again in a latent state of war over the assassination of the seasoned Iranian general.

General Qasem Soleimani was an icon of the Axis of Resistance, a man who took numerous actions all across Iran, Iraq and Syria during all military operations in the Middle East, clearly promoting Iranian politics and its allies in the region, thus demonstrating the strength of the defense alliance that has existed for several decades.

The formation of National Defense Forces in Syria, support for the Iraqi army and Shiite militias in the fight against the Islamic State, support for Shiite forces composed of Afghans in Syria, all made General Qasem Soleimani seem to have the ability to be everywhere at the same time.

America has withdrawn from the Syrian-Turkish border and its presence has since been limited to areas east of the Euphrates and in western Iraq, with an estimated 10,000 US troops (mainly in Iraq). All we have seen so far in Syria is the gradual withdrawal of America and its troops, a far departure from their earlier stated goals.

Suddenly, after months of US withdrawal from the region, we saw a strong American resurgence, however this time not in Syria but in Iraq. Occasional squabbles between US troops and Shiite militias have been ongoing since the outbreak of the war against the Islamic State and have escalated in recent months.

In the latest US airstrike, around 25 members of the Shiite militias were killed, while soon afterward, members of the militias set the US Embassy in Baghdad on fire. America’s response was nothing less than the assassination of one of the most powerful men in the Middle East as wells as his right-hand man and closest ally in Iraq.

Whether or not the unceasing spiral of violence will turn into a regional war or stop at mutual responses within the acceptable limits depends primarily on the military potential of both sides, as well as their ability to muster allies in a potential war.

Iran’s military options as a possible answer to America

While the Deir Ez-Zor relief operation was underway, an incident broke out with the USAF shooting down a Syrian Su-22. Iran responded with a long-range missile strike at Islamic State positions in areas surrounding Deir Ez-Zor.

Although most certainly not a cost-effective way of using a long-range missile, it was in fact a clear message to America where the red lines for Iran were. However, at the time, the Axis of Resistance was in a much worse position than today when the Islamic State exists only in the form of terrorist cells in the desert. The land route between Iran, Iraq, Syria and Lebanon has been established.

Given that the US did not invade Iran when it had a potentially inferior position, the question is why the escalation of the conflict now. If America wanted to wage war with Iran, there were certainly better strategic situations before.

The main problem with a classical intervention against Iran is very simple. A war with Iran implies a regional war, but with global repercussions. From Iran to the Mediterranean, this part of the Middle East is covered with a network of Iranian allies that would instantly ignite the entire Middle East.

It is now clear that the three main pillars of Iran’s defense strategy are based on powerful air defenses, short, medium and long-range missiles deployed in Lebanon, Syria, Iraq and Iran, and various Shiite militias that by some estimates number over 150,000 people in Iraq alone and can launch mass attacks on isolated American facilities. Then there’s also the control over the strategically crucial Strait of Hormuz.

However, a response with all available means would mean immediate regional war. Iran has established a land route to the Mediterranean and a major war hardly suits Iran, since it would prevent it from capitalizing on its victory in the years-long Syrian war. Still, many expect a clear answer. The question remains as to whether the retaliation could be limited and what response Iran is preparing.

Iranian weapons America should be worried about the most

Iran boasts one of the most powerful militaries in the broader Middle East/North Africa region. Despite Western state and corporate-run media claiming Iran’s military is mostly composed of decaying pre-Revolution era Western (mostly US-made) weapons and equipment, allegedly suffering a severe, chronic lack of spare parts and in urgent need of modernization, Iran has proven this is quite far from true.

Apart from large and well-equipped land and air forces, Iran has managed to not just modernize the existing equipment, but also create a strong indigenous industrial base for up-to-date weapons and equipment. This is true not just for tanks, artillery and jets, but for a plethora of strike and air defense missile systems, which are essential for a country threatened by a possible US aggression. Estimated Iranian SAM systems coverage; data may vary due to most SAM systems being road-mobile There is also the Sayyad-3 long-range missile, used by the Khordad 15 system, which has a range of 200 kilometers (120 mi). Reportedly, the system can also detect stealth targets from a distance of 85 kilometers (53 mi) and can intercept and destroy them within a range of 45 kilometers (28 mi).

Bavar-373 (“Belief”) is an Iranian long-range SAM system. Described as “a competitor to the S-300”, it was deployed by the Iranian military in August 2016. Bavar-373 utilizes the Sayyad-4 missiles, which are contained in two rectangular launch canisters. The missile has a range of 200 km (120 mi).

Raad or Ra’d (“Thunder”) is an Iranian medium-range SAM system, a derivative of the Russian Buk SAM. Designed to work in conjunction with the long-range Bavar 373, Raad is designed to neutralize fighter jets, cruise missiles, smart bombs, helicopters and drones.

The system is equipped with Taer (“Bird”) missiles, which can track and hit targets in ranges up to 50 km and in altitudes from 25 to 27 km (75,000 feet). On June 20, 2019, the system shot down a US RQ-4A Global Hawk surveillance drone over the Strait of Hormuz after it violated Iranian airspace. 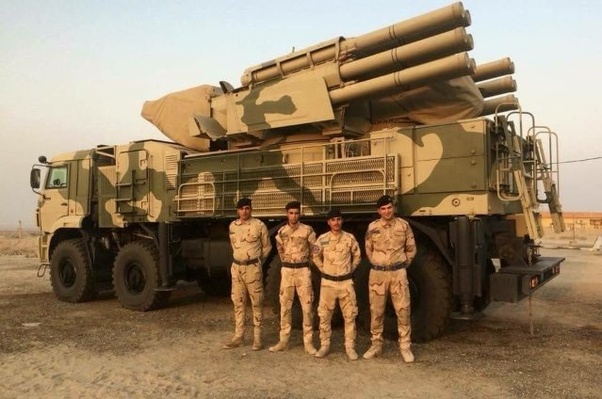 Apart from these most prominent air defense systems, the Iranian military possesses a plethora of other domestic and foreign-made short and medium-range AAA and SAM systems, including the battle-proven Russian-made Pantsir point defense/short-range hybrid AAA/SAM system. 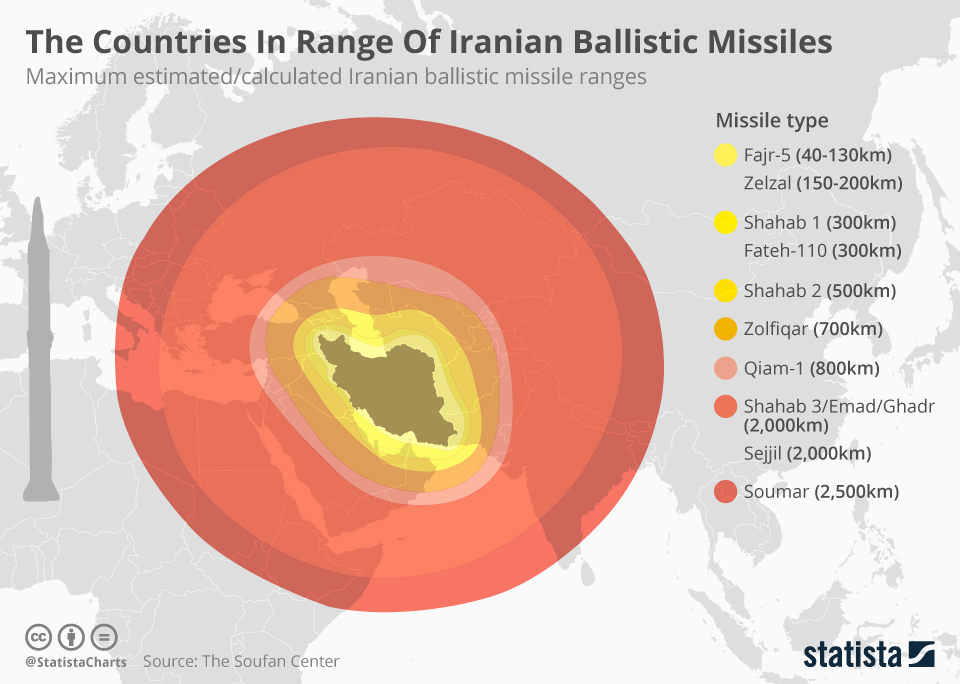 Despite Iran’s potent air defense arm, its true power lies in its ability to deploy some of the world’s most advanced land-based medium-range ballistic missiles. After the now-defunct INF Treaty was signed between USSR and the US, Iran secured technical assistance from North Korea.

In a matter of years, the country developed numerous domestic and foreign-inspired short, medium and intermediate-range ballistic, as well as cruise missiles. These systems, although initially lacking in precision, have since been significantly upgraded and now pose an existential threat to the imperialist interests of the US and its Middle Eastern allies and vassals.

Apart from these weapons, Iran is also in possession of numerous types of torpedoes and air-to-air missiles. It also boasts an unexpectedly advanced drone technology, allowing it to deploy domestically-designed ISR (Intelligence, Surveillance and Reconnaissance) and strike drones.

Western analysts and think tanks often cite America’s mind-boggling $750 billion “defense” budget and a massive network of hundreds of US overseas bases as dwarfing anything Iran can deploy. However, although significantly larger, US Armed Forces are in an imperial overstretched and could never be deployed only in one place.

Thus, Iran, in reality, has an advantage over US forces currently deployed in the Middle East, while US allies and vassals cannot match Iran’s missile and air-defense capabilities. With the notable exception of Israel, no other Middle Eastern country has the ability to strike targets within Iran by using ballistic and/or cruise missiles, while lacking in proper layered air defense systems.

As previously stated, it’s not in Iran’s best interest to engage in an all-out war with the US and/or its allies/vassals, but it would also be unwise to let the US attacks go unpunished, as it would send a message that the US and its allies/vassals can get away with blatant acts of aggression, as it was the case with numerous other smaller and less powerful nations throughout the Middle East and beyond.