I was alerted to this by a reader:
This morning I read a NZ Herald item about the Counties Manakau D.H.B. employee Pauline Hanna, who died in “unexplained circumstances” at home at Easter. Written regarding the husband being a person of interest to the Police.
Towards the end of the item is said that she received her second shot of the vaccine earlier in the day. This was stated simply in the way of establishing the events of her last day.
When I reread the item this afternoon to get my facts right there was NO TRACE of the sentence about the second vaccine.
This is what we are up against. They will say if ever asked, oh it was a misunderstanding of what the husband said or some other excuse, now corrected, and how will we know otherwise?
I predicted that news of vaccine injuries and deaths would be suppressed in this country after I saw an item that HALF of the residents of a rest home in Ontario, Canada had died, just like that, from a new strain of covid that miraculously travelled from South Africa (or wherever) and landed in a rest home.
I think I have been proven right.
Parallel to this,  the details of a woman injured by the Pfizer vaccine has not appeared on the Register, presumably because her doctor withheld the information.
Robin Westenra · Nelson lawyer, Sue Grey takes on the NZ government
You can see the changes clearly here 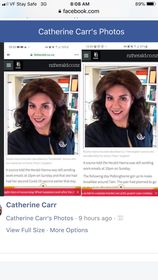 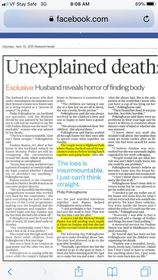 Pauline Hanna and Philip Polkinghorne in 2018. Hanna was found dead in her home on Easter Monday. Photo / Norrie Montgomery

The husband of the woman who died under unexplained circumstances at their Remuera home says he is being treated as a “person of suspect” by police.

Philip Polkinghorne, an Auckland eye specialist, told the Weekend Herald he was advised by his lawyer not to talk but he wanted to say his wife Pauline Hanna was the most “remarkable” woman who was adored by her family.

Pauline Hanna, 63, died at her home in the Auckland suburb of Remuera on Easter Monday. Police are still investigating the circumstances around her death, which authorities are treating as unexplained.

“As you may or may not know I am a person of suspect so I need to talk to my legal counsel whether I should say or shouldn’t say anything,” Polkinghorne said.

Hanna worked at Counties Manukau District health board as an executive project director.

“She was incredibly hardworking, a magnificent woman who worked very hard for her community – she gave everything she had to make a success of the Covid programme making sure the hospitals had the right equipment and supplies. She worked night and day, Sunday was the last time she had a bit of time off.”

“Our relationship wasn’t fine, it wasn’t fine at all, it was perfect.”

The couple met through work and have three adult children from Polkinghorne’s first marriage. One son is back from London in quarantine and the other two live in Auckland. Polkinghorne is currently staying with his sister while the couple’s Upland Rd home in Remuera is being examined by police.

“The children are taking it one day at a time but we are all in shock, she was a lovely, lovely person.”

Polkinghorne said she was always involved in the children’s lives and was so happy to later have a grandson.

“She always considered them ‘her children’. She adored them.”

Polkinghorne said Hanna worked all through Easter but they were able to spend some time together on Sunday. The couple went to Highland Park where Hanna checked in on one of the vaccination stations before having lunch together and going home. After dinner, the pair watched television together and Hanna helped Polkinghorne write a letter.

“I said goodnight to her. I went to bed and she went to bed. That was the last time I saw her alive.”

A source told the Herald Hanna was still sending work emails at 10pm on Sunday.

The following day Polkinghorne got up to make breakfast around 7am. The pair had planned to go to the gym after breakfast.

“Normally I go before her but she wanted to go to the gym at 9am. I think she had a meeting at 10.30. I got up to make her tea and toast – that’s what she always had. She is the only person in the world that I know who can have a cup of tea lying on her back,” Polkinghorne said.

Polkinghorne said there were no problems in their marriage and he wasn’t at liberty to comment about Hanna’s state of mind or whether she was stressed.

“I know there was stuff she wouldn’t talk about. Her mother died some six weeks earlier after an illness, she had been unwell for some time.

“I believe Pauline was overworked but she was extremely highly regarded by her work colleagues.

“People would ask me what her role was and I didn’t really know, but she could fix any problem.”

Polkinghorne doesn’t believe an intruder came into the house because it was alarmed and monitored.

“I don’t think there is anything nasty like that at all.”

Polkinghorne hasn’t been able to return home but he was allowed to get his wallet and car.

“I needed to get my wallet out of the house and some keys for what I call my red truck that was outside the property. We have three vehicles, two were inside the house and I asked the police if I could use the one outside,” Polkinghorne said.

“Yesterday I was able to buy a toothbrush and a change of clothes and things because I had nothing.”

A memorial service for Pauline Hanna was held at Middlemore Hospital yesterday. There is no funeral date set but Polkinghorne said his children were organising the details.

Editor’s note: An earlier version of this story said Pauline Hanna had received her second Covid vaccine the day before she died. That line was removed at the request of her family because they did not want the anti-vax community to think the vaccine is connected to her death. There is no suggestion it is.

4 thoughts on “Woman in Auckland dies after second dose of Pfizer vaccine: media removes all references”