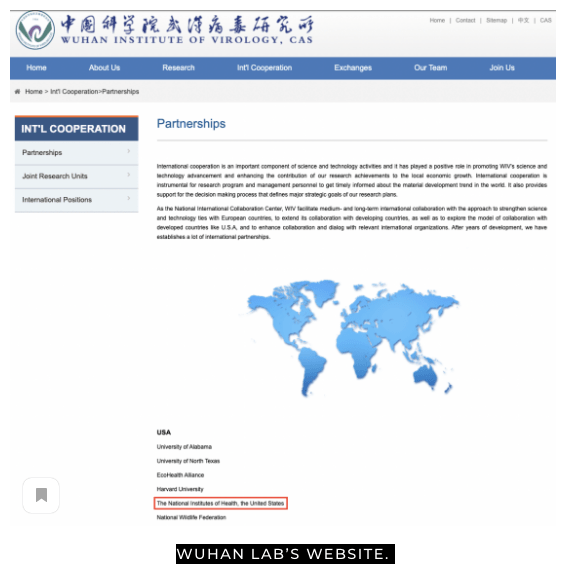 The Wuhan Institute of Virology scrubbed the U.S. National Institutes of Health as one of its research partners from its website in early 2021. The revelation comes despite Dr. Anthony Fauci insisting no relationship existed between the institutions.

Archived versions of the Wuhan lab’s site also reveal a research update – “Will SARS Come Back?” – appearing to describe gain-of-function research being conducted at the institute by entities funded by Dr. Anthony Fauci’s National Institute of Allergy and Infectious Diseases (NIAID).

The Wuhan Institute of Virology’s decision to wipe the NIH from its website came amidst heightened scrutiny that the lab was the source of COVID-19 – and that U.S. taxpayer dollars from the NIH may have funded the research. The unearthing of the lab’s attempted coverup also follows a heated exchange between Senator Rand Paul and Fauci, who attempted to distance his organization from the Wuhan lab.

Beyond establishing a working relationship between the NIH and the Wuhan Institue of Virology, now-deleted posts from the site also detail studies bearing the hallmarks of gain-of-function research conducted with the Wuhan-based lab. Fauci, however, asserted to Senator Paul that “the NIH has not ever and does not now fund gain-of-function research in the Wuhan Institute of Virology.”

A summary of the work conducted by Wuhan Institue of Virology researchers “in cooperation with researchers from University of North Carolina (UNC), Harvard Medical School, Bellinzona Institute of Microbiology and etc” describes scientists as “generating and characterizing a chimeric virus,” noting how modifications allowed the virus to “replicate efficiently in primary human airway cells and achieve in vitro titers equivalent to epidemic strains of SARS-CoV”:

“Using the SARS-CoV reverse genetics system, the scientists generated and characterized a chimeric virus expressing the spike of bat coronavirus SHC014 in a mouse-adapted SARS-CoV backbone. The results indicate that group 2b viruses encoding the SHC014 spike in a wild-type backbone can efficiently use multiple orthologs of the SARS receptor human angiotensin converting enzyme II (ACE2), replicate efficiently in primary human airway cells and achieve in vitro titers equivalent to epidemic strains of SARS-CoV. Evaluation of available SARS-based immune-therapeutic and prophylactic modalities revealed poor efficacy; both monoclonal antibody and vaccine approaches failed to neutralize and protect from infection with CoVs using the novel spike protein.”

“On the basis of these findings, they synthetically re-derived an infectious full-length SHC014 recombinant virus and demonstrate robust viral replication both in vitro and in vivo,” the article concludes.

During Fauci and Senator Paul’s recent exchange, the NIAID Director was also pressed on gain-of-function research carried out by UNC researcher Dr. Ralph. Baric, who has received 173 grants from Fauci’s agency.

“Dr. Baric is not doing gain-of-function research, and if it is, it is according to the guidelines and is being conducted in North Carolina. If you look at the grant and if you look at the progress reports, it is not gain-of-function, despite the fact that people tweet that, write about it,” Fauci responded to Senator Paul despite UNC being listed as a research partner in the blog post above.

Watch the Tucker Carlson segment from May 10th that is only available on Banned.Video because Fox News refuses to post it on YouTube for fear of being penalized. Usually, Fox News posts Tucker’s entire show, including the opening monologue, however, when he called out Anthony Fauci for letting the coronavirus pandemic happen, they decided not to post it. Infowars is filling in for their failure as a public service announcement